That One Time I Tried to Be a Craft Blogger: A Warped Tour Story and a DIY 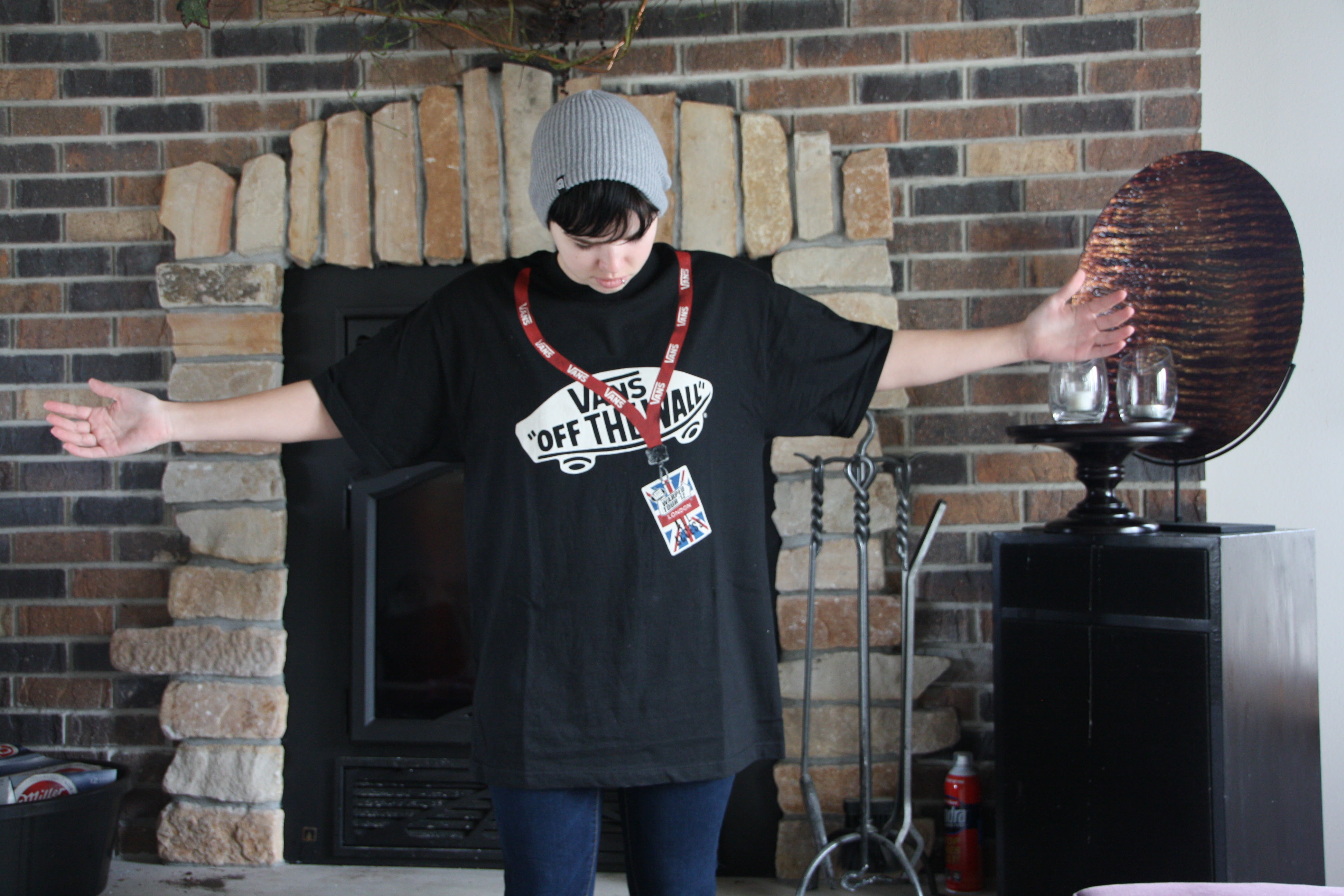 This is a DIY but also a story. If you don't want to hear my story, feel free to scroll down until you find pictures.
So I'm at Warped Tour UK and I know I want a shirt to commemorate it. I'm short on pounds and know that everything will be eye-poppingly expensive. But here's the kicker: because of fire hazards, they would only let a certain amount of people into the merch hall a time. This translates into a huuuuuge line to just to SEE the stuff, let alone ANOTHER line to actually purchase it. I forgo-ed in lieu of seeing more bands.
But, eventually, the line died down and I had a break before I saw 3oh!3 so I wandered in...and it immediately became clear why there was no line. The entire place was picked. clean. Like, hardly anything was still up on the walls. Completely sold out. A tad devastated, I wandered from booth to booth, trying to find anything that said both "warped tour" and "uk" on it. Eventually, I found myself at the Vans tent, which still had a few t-shirts up. I spoke to the guy behind the table, asking about prices and wondering aloud about which shirt was the best. He asked about my accent; I asked about his. Turned out we were both from Boston and spent a few minutes chatting about how we ended up in London (he on business, me on school). Through either regionalism or just plain-ol American hospitality, he offered me a deal I couldn't refuse: any shirt on the table for ten pounds, plus a hat or bag. This, when the other seller had told me fifteen pounds for a shirt. There was one design I liked best: the Vans logo with a printed "Warped Tour UK All Access Pass" draped around the neck. I pointed, elated, only to be told that all they had left were larges. In fact, every shirt they had left was a large. The ten pound deal became clear. I bit my lip and Boston Guy jumped in: "I mean, you could cut it up. Then it might fit you." I erred on having an awesome shirt, albeit too big, and snapped up the deal. The hat's packed away somewhere, but that's a gem too.
Anyway, I wore it as a pajama shirt for the last few weeks of Castle living, but I dreamed of wearing it...places. Of being able to share the joys of music with the world. So I took the advice of Boston Guy. I would...cut it up. 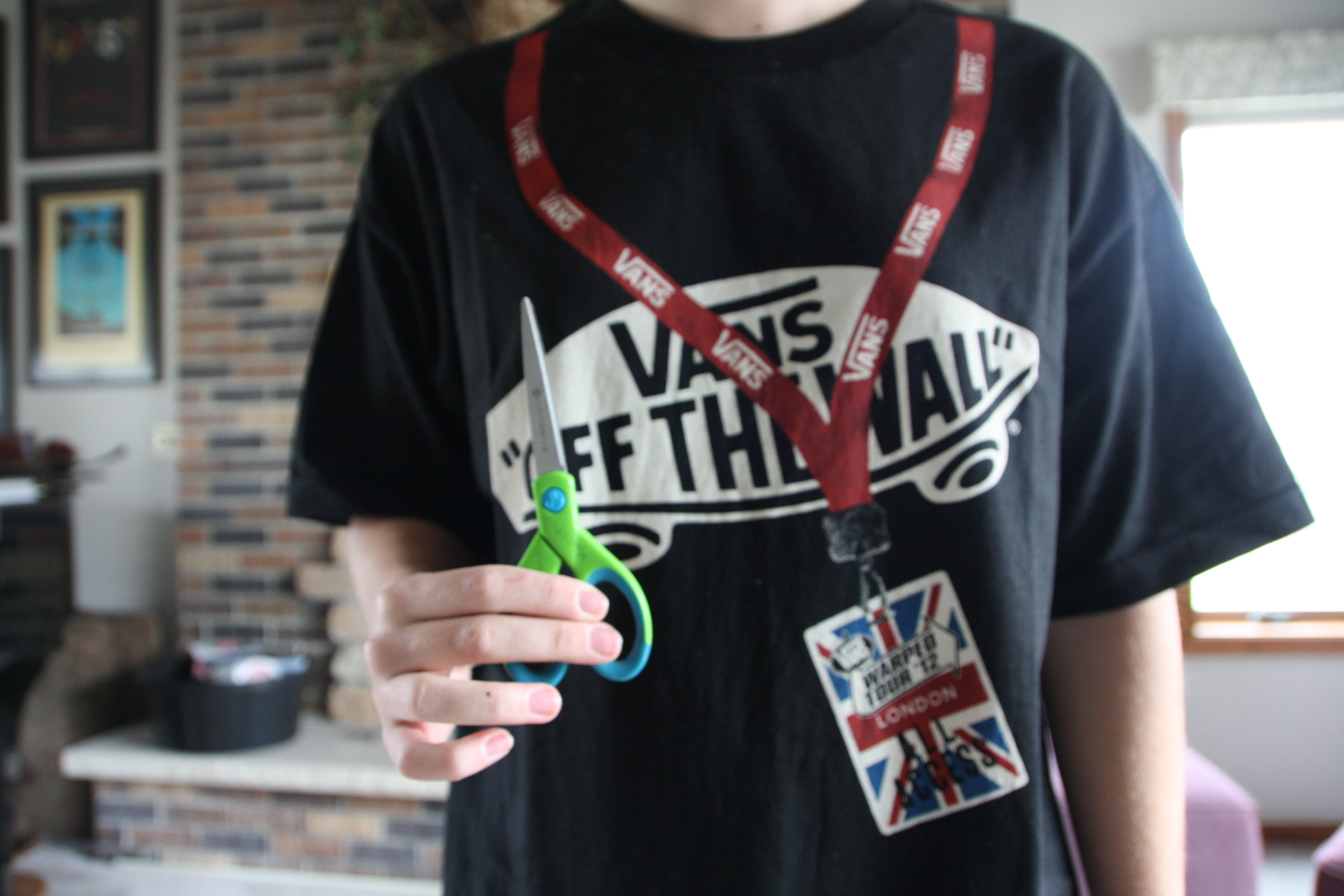 Believe me, I've done my fair share of summer camp cut-up-the-sides-and-tie-them to make men's shirts women-sized. But I hate the tassels and wanted something I could actually wear around without looking like I was going to the canoe tutorial. So then I was hit with another life-changing idea. I could...flip it inside out. And then tassel. And then right-side-out it. And wear it...places. (My mind speaks with a lot of dramatic pauses.)
So, with a little google searching and a lot of anxiety, here's my DIY:
First off, you'll need a good pair of scissors, chalk, and a shirt that fits you (I chose my beloved Fall Out Boy shirt, circa 2007). 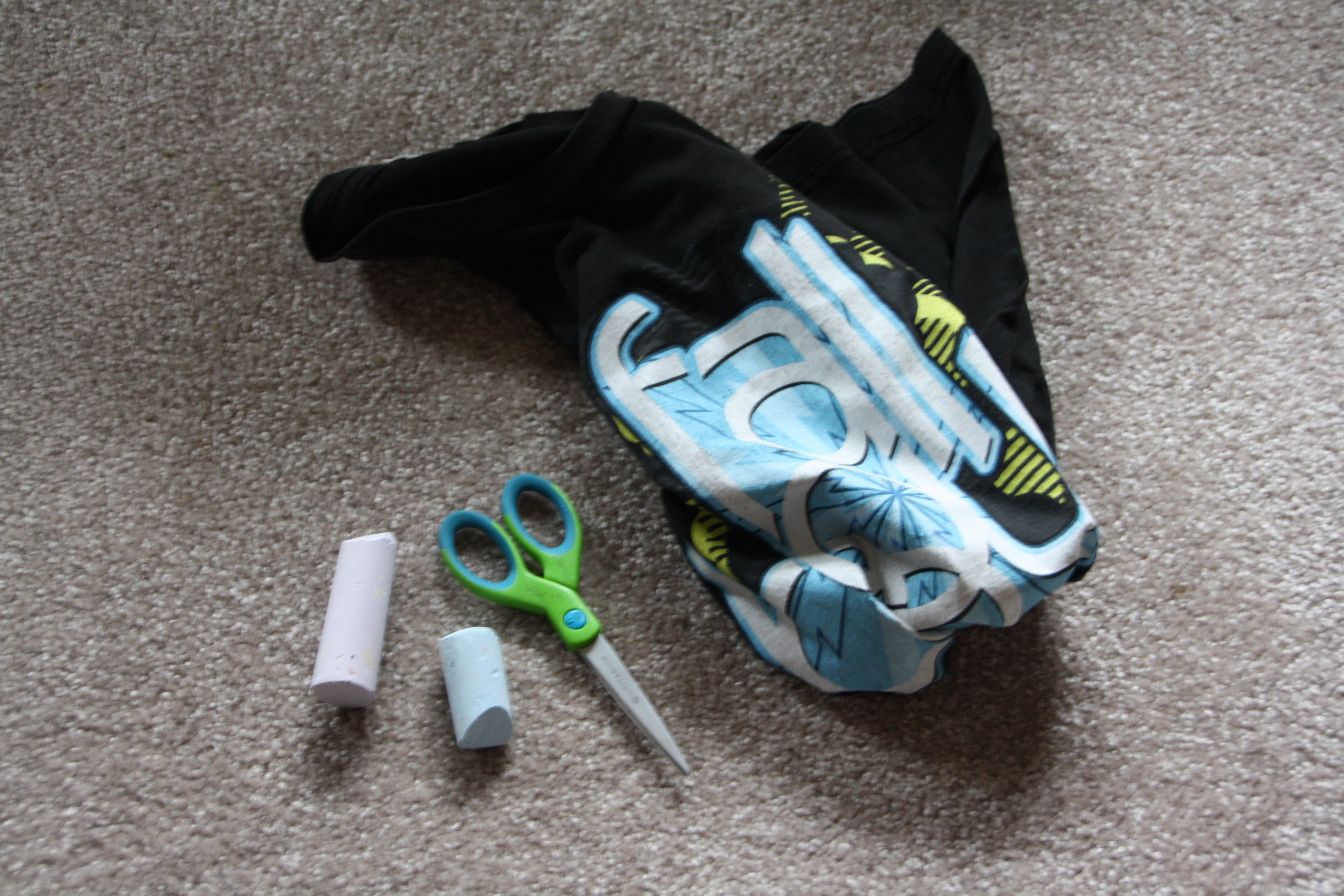 Inside-out your too-big shirt and lay it flat, then put your well-fitting shirt over it. 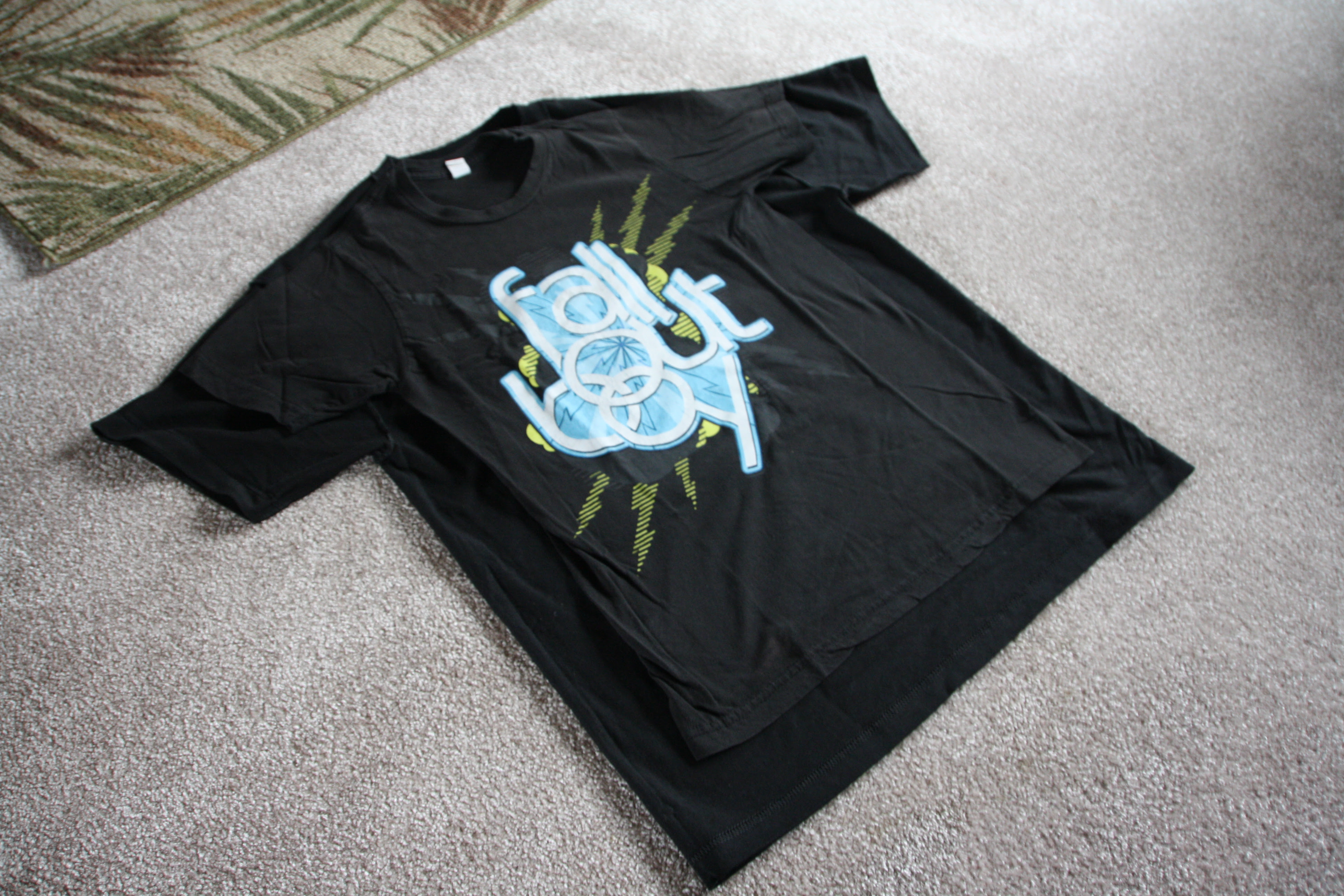 Chalk the outline, keeping the line as thin as possible. 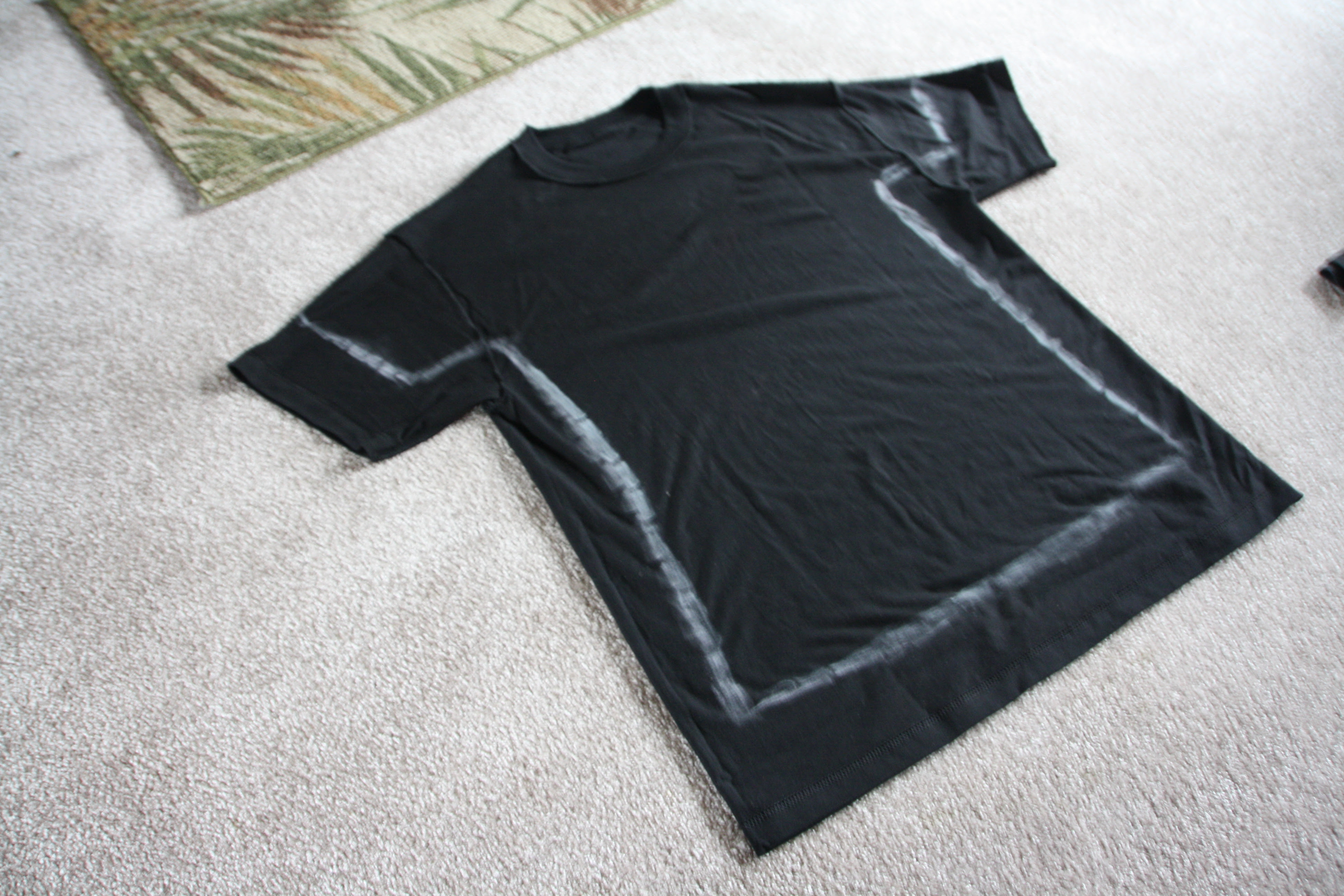 Then, make your cuts. I wanted my Vans shirt to be fitted, but not too tight, so I cut up until I hit the line. I also took off the bottom end of the shirt and cut out a bit of the sleeves, since they were giant. 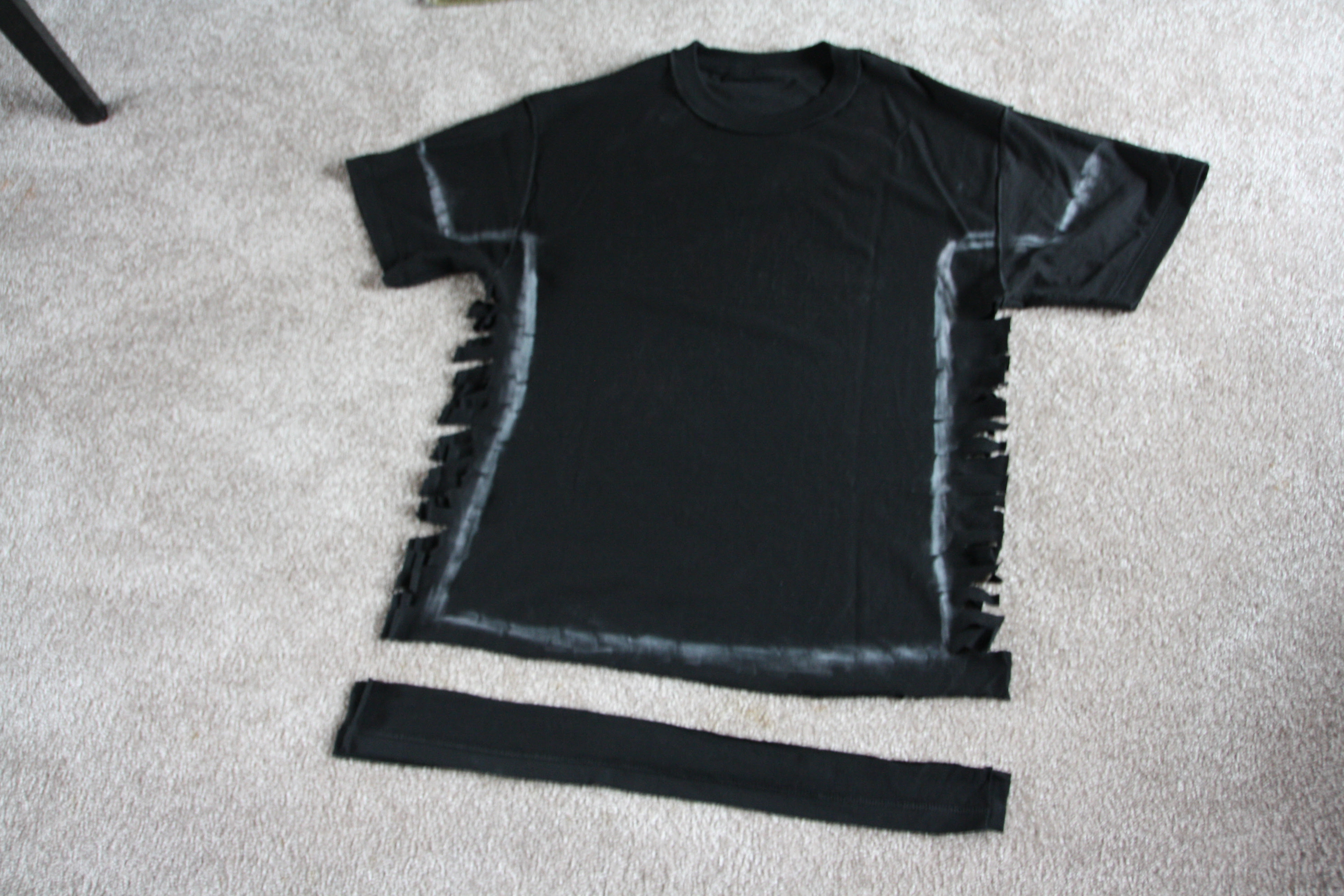 After that, tie tie tie. This is really a pain, but my best suggestions are to keep your cuts real narrow and double knot. (I didn't double knot the first time and when I went to turn out the shirt, it all fell apart. Learn from my mistakes, people.) 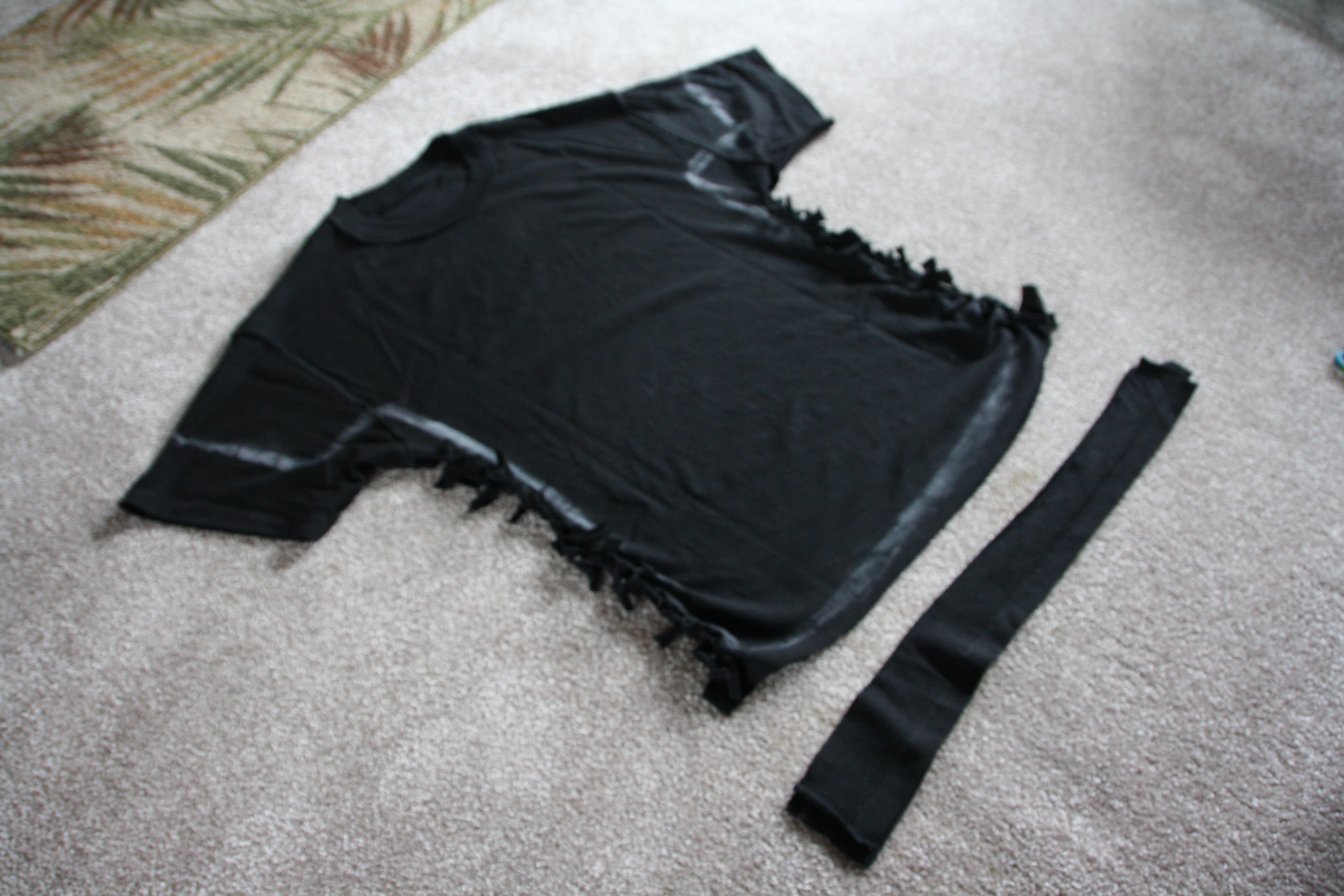 Finally, right-side-out your shirt! Admire your handiwork. Drag family members away from their important things so they can rain praise upon you. Take pictures to post on the internet. 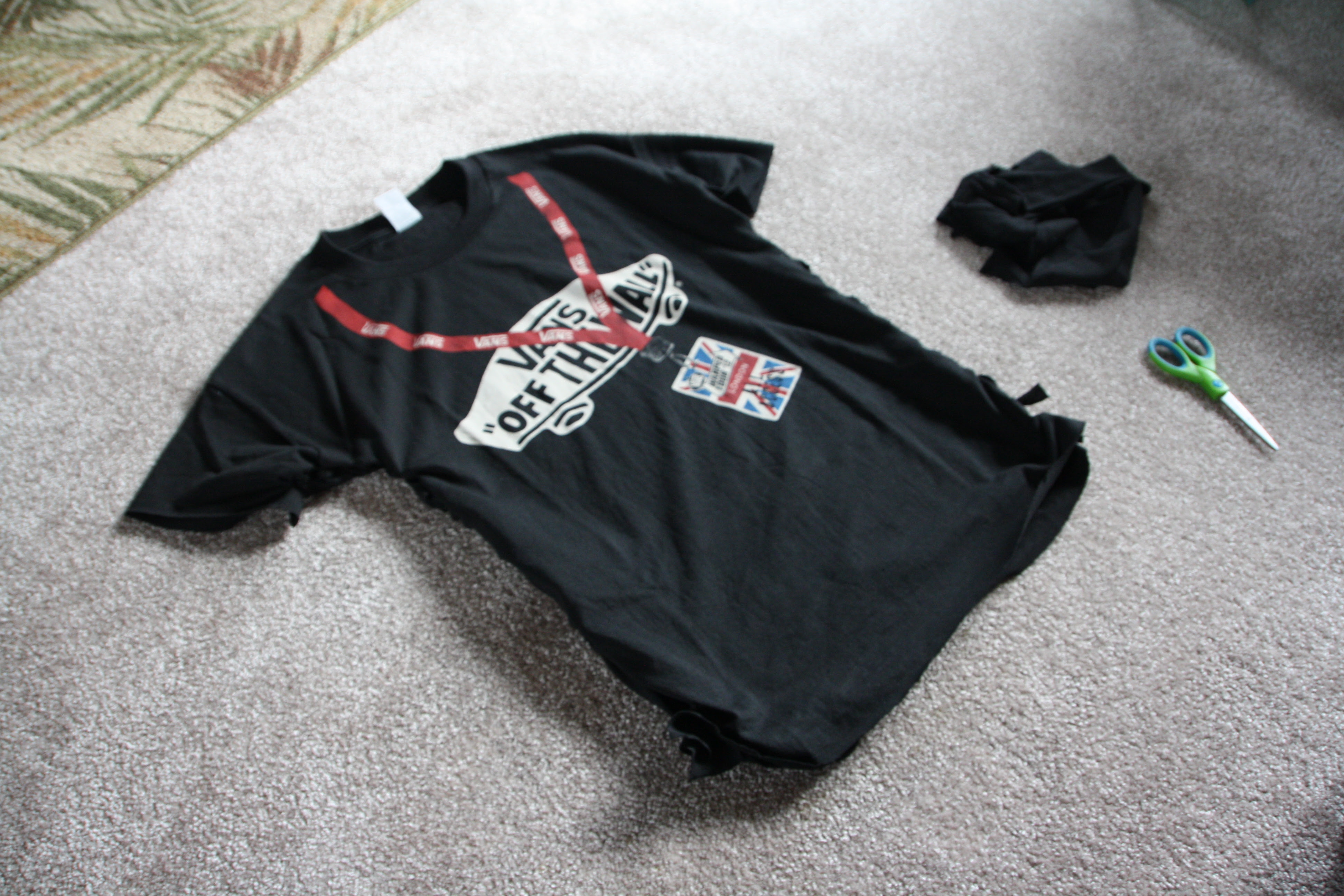 And, of course, wear your shirt. You, DIY-er, are a superstar. 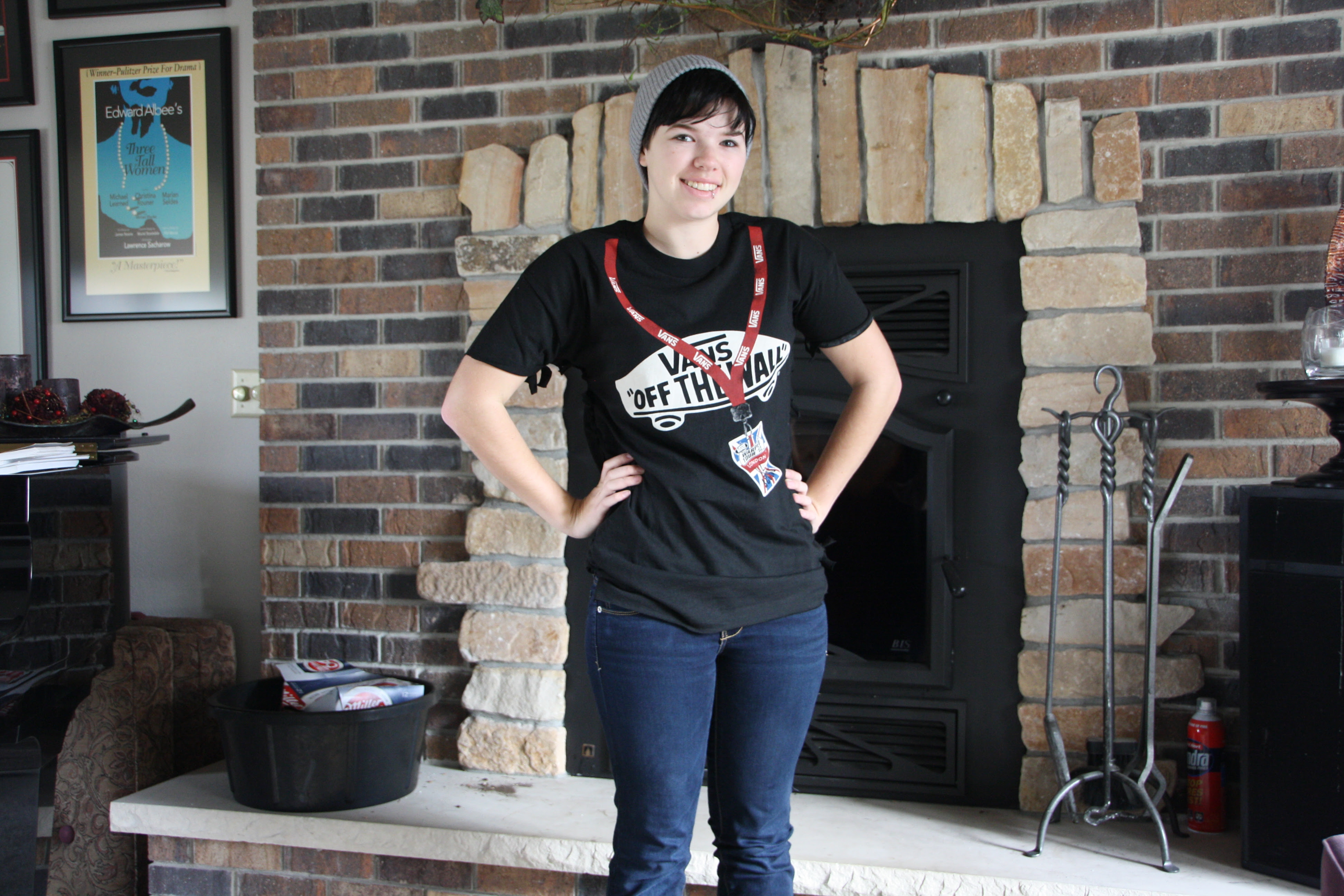