How to Have a Great Time Without Getting Your Teeth Knocked Out: My Concert Safety Guide 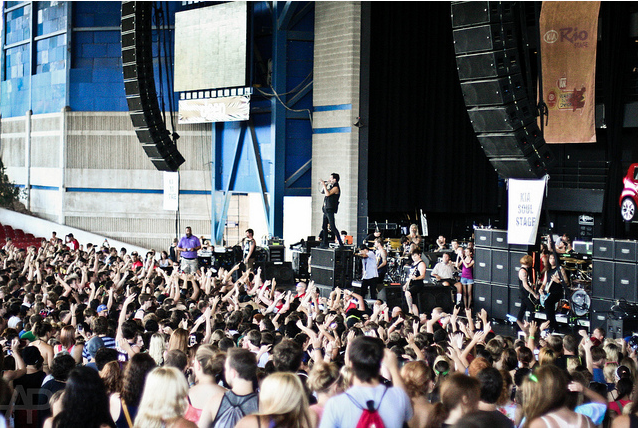 I get asked about concert safety on a fairly regular basis. I've seen probably hundreds of bands and have managed to only get seriously injured once. (And that was just loosing my front teeth...long story.) Some of it's luck, some of it's smarts. Anyway, here's what I do to keep myself safe.
Disclaimer: I don't listen to that heavy of bands. This is just what I see in pop punk/easycore shows, for the most part.
GENERAL ADMISSION.
what it is: Any time you buy a "GA" ticket, this is what you get. You stand on the floor in front of the stage ("the pit") and get to watch the bands play. Depending on the venue, this may mean there are open seating areas to the sides/above you, or you might have to purchase a different ticket entirely to gain access to those areas. In this open area, there may be intense pushing, mosh pits may open up, and there may be crowdsurfers.
if you're in the crowd: Hopefully, you know the band and the fanbase you're going to be mixing with. I've seen GA areas be calm places where everyone just watches, and I've also found myself in some of the nastiest pits possible. If you get clastrophobic or you don't like being pressed up against strangers, I would not recommend GA. If you don't like pushing/shoving/a lot of sweat, I would not recommend GA. If you're not sure how heavy the band is going to be, wait on the outskirts and watch the first few songs (these are usually the rowdiest), then head in.
if you're doing it: Well, you basically just have to hold your own. If there is a ton of pushing, do not push back. Keep an eye on your surroundings (and whoever came with you) and do your best to anticipate whatever might happen. For instance, usually there are a ton of crowdsurfers during the last song or a ton of pushing during the first few. Stay hydrated, wear good shoes for standing (and dancing!), and have a good time!

(via)
MOSH PITS.
what it is: Depending on the band, this can mean many different things. For pop-punk or easycore bands, it's just an open circle with a bunch of kids jumping around and pushing each other. For heavier bands, it can get up to the point of actual punching or beating up of each other. Again, know your band and your fanbase. ALWAYS watch the pit for a few minutes and make sure you can handle it before heading in.
if you're in the crowd: These usually open up during a faster or more intense song, and usually directly in the middle of GA area. Everyone will push back and make the space, and then others will stand around the outside and keep everyone contained. If you don't want to be in the pit, scramble between one of these people and watch from the safety of over one of their shoulders.
if you're doing it: Don't throw a hit harder than someone can take. I usually use my forearms or open palms to push someone, and then bounce around and keep doing that. If you're in a heavier pit, there are much harder hits. Protect yourself and make sure you are constantly moving so you don't get knocked off your feet. If someone falls, stop everything and help them up. If someone looks seriously injured, it is your job to help them up, escort them out of the area and take them to first aid.
CROWDSURFING.
what it is: Usually starting in the back/middle, kids jump into the crowd and are passed forward to the front.
if you're in the crowd: Do not yell at crowdsurfers to stop/shout insults at them. I've seen a crowdsurfer get punched in the nuts. That's not cool. If you don't like them, don't stand in GA. They're just having a good time. Yes, there is a possibility you might get kicked in the head. Yes, there are heavy crowdsurfers. If you fear you won't be able to lift them, get in front of someone who's tall (even if they don't necessarily look strong), since they usually will be able to pass the person over you. Also, if you're closer to the front, there is security pulling them off the front row. Usually there is a head guard who points to the others to signal where crowdsurfers are coming from. Watch him and inform the people around you.
if you're doing it: You can usually "get up" by either asking someone around you (pick someone strong) or you can head to the back and there may be someone launching people from back there. Once you're in the crowd, don't flail or try to crawl yourself forward. If you're a girl, I highly recommend laying on your back, otherwise some full on gropage occurs. Don't do it in a sitting position, since you're much more difficult to lift that way. Apart from that, scream the lyrics and try to get a high five from the lead singer.
**There is sometimes what I call "suicide surfing," where a person needs to get out of a crowd but it's too tight to shove their way out. Being at a lot of pop punk/pop rock concerts, a lot of people go as their first concert and soon find that GA isn't for them and need to get out. If this is you, ask politely for someone to help lift you up and get you out. You can usually do this at set breaks (when you don't have to worry about a crowd going nuts over the music) and people are usually very nice and help you out. I usually keep my eye out for kids that look like they're having a not-so-great time or are trying to push away and offer to help them surf out. Believe it or not, this is probably the safest and easiest way to get out of a pit at a soundcheck break. 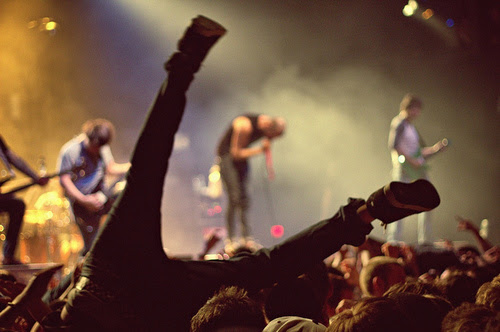 (via)
STAGE DIVING.
what it is: At smaller venues, there aren't security/a barrier, so the crowdsurfers can get passed right on stage. They then leap off and into the crowd.
if you're in the crowd: It's very similar to crowdsurfing. Make sure you catch them. Make sure you're not the only one catching them. Again, tall people are best to stand next to.
if you're doing it: By god, please be safe with this one. I've seen more concussions from this than I have of any other sport or concert activity ever. The best way to guarantee you're going to get caught is to make eye contact with someone in the crowd and nod to them, and usually they're prepared for you to jump. Also, you're much easier to catch when you don't actually DIVE, but JUMP. Also, don't engage the band members on stage too much. They're trying to perform and even if you think you're being cool while trying to take a selfie with them onstage, I've seen them give speeches about how it's just distracting. They'll meet you after the show. Hug them then and explain what an awesome time you had.

Labels: how to, music, tour